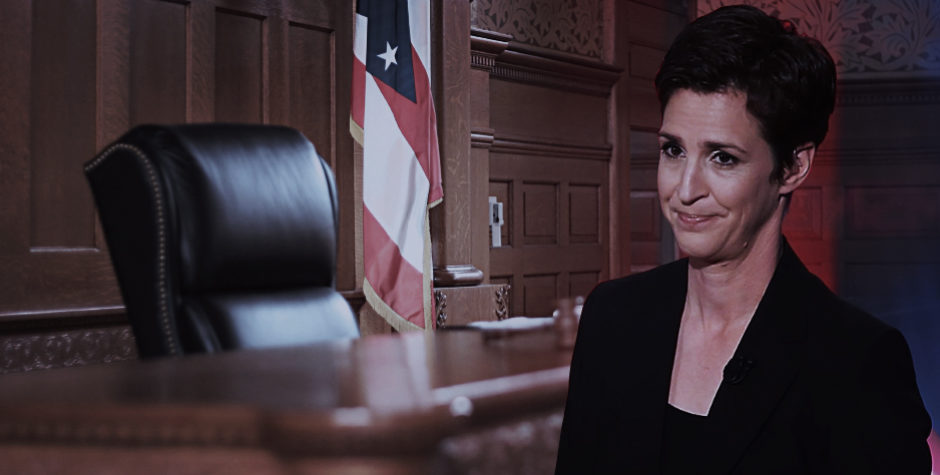 The Left in Washington, DC is at it again—this time attacking a Jewish nominee to the federal courts by charging him with racism over his support for Israel’s status as a Jewish state.

You heard that correctly. Steven Menashi, a highly qualified nominee to the Second Circuit Court of Appeals, is being accused of racism—white nationalism, to be specific—due to his past academic writing in defense of Israel’s simultaneous status as both a liberal democracy and a homeland for the Jewish people.

This ridiculous attack was sparked by MSNBC’s Rachel Maddow, who used a nearly 14-minute segment to castigate Mr. Menashi’s academic defense of Israel’s government structure. Ms. Maddow contorted Mr. Menashi’s argument that ethnic diversity is not a precondition for liberalism into one of questioning the benefits of ethnic diversity—an argument Mr. Menashi never made.

To make this accusation even wilder, one must consider that Mr. Menashi is himself a product of ethnic diversity. His father was born in Iran and his paternal grandparents were Iraqi Jews who lived in Baghdad and Tehran before settling in Israel. Mr. Menashi’s maternal grandparents emigrated to the United States from Ukraine and Lithuania, and his in-laws came to the United States as Jewish refugees from Russia.

So Mr. Menashi knows from personal experience the beautiful benefits of America’s status as a diverse nation of immigrants. He also knows the importance of Israel’s role providing a homeland for the Jewish people.

Furthermore, Ms. Maddow’s assertion that Mr. Menashi’s writing is a “high-brow argument for racial purity” and that he believes “democracy can’t work unless the country is defined by a unifying race” is simply patently and maliciously wrong. In fact, Mr. Menashi is quite clear that liberal democracies MUST guarantee equal rights. It is also worth noting that ethnicity is NOT a factor in determining the political rights of an Israeli.

In short, to suggest that Mr. Menashi’s defense of Israel as a homeland for the Jewish people is a form of white nationalism is an egregious and shameful allegation. It is one only made worse when considered against the backdrop of Mr. Menashi’s heritage.

Ms. Maddow’s attack on Mr. Menashi takes anti-Semitic BDS (the Boycott, Divestment, and Sanction movement) to a whole new level. Because he supports Israel as a Jewish state, he is a racist and must be boycotted from the federal bench. Her smear is that transparent.

Maybe most important, these wild attacks serve as a distraction from Mr. Menashi’s impeccable qualifications. A Stanford Law grad, Mr. Menashi clerked for Justice Samuel Alito and DC Circuit Court Judge Douglas Ginsburg before going into private practice and earning partner status at Kirkland & Ellis. After private practice, Mr. Menashi was an Assistant Professor at George Mason University, and later served as Acting General Counsel at the Department of Education. Most recently, Mr. Menashi was Senior Associate Counsel and Special Assistant to the President.

Given Mr. Menashi’s esteemed career and the many accolades earned along the way, it is likely the Left had no alternative other than far-flung and malicious attacks of racism. If our federal courts are to maintain their status as neutral arbiters of justice, it is imperative that baseless personal attacks such as these be rejected.

The ACLJ encourages the U.S. Senate to examine firsthand Mr. Menashi’s strong academic writing and outstanding professional career, and to reject with animus these unfounded attacks.

The ACLJ Needed Now More Than Ever: The Constitution

The following is the final installment of a six-part series focusing on why the ACLJ is needed now more than ever to protect the victories we’ve achieved and beat back the ominous challenges we now face under the Biden Administration. At the ACLJ, we will always have a clear eyed view of the...

Day 3: How Much Longer Will the Impeachment Trial Last? (Recap)

The unconstitutional impeachment trial continues. How much longer will it last? Today on Sekulow , we discussed the Senate impeachment trial, as the House impeachment managers put on their full attack on President Trump, trying to make a connection between the President’s words and the horrific...