Thanks to a recent announcement by President Trump, we will now be able to fully expose fired FBI Director James Comey’s corruption to the world.

A new TV movie is portraying Jim Comey as some kind of hero or patriot, but don’t be fooled by Hollywood’s leftist propaganda. Comey was corrupt. Even one of his own agents said the entire investigation was just to “get Trump.”

We’ve already told you how Comey reportedly placed spies in the White House to provide him information on the President’s activities. Through our Freedom of Information Act (FOIA) lawsuit, we recently obtained documents showing that President Obama’s White House Counsel emailed Comey and his deputy, Andrew McCabe, the day before President Trump’s inauguration and attached a “TOP SECRET” letter. We also know that letter involved the reported spy Comey placed in the White House because those are the only documents we requested. Other records have been withheld from us in this case, too, based on the agency’s claims that the material is classified.

Our legal team is engaging with the lawyers for the FBI, the NSA, and the State Department in an effort to obtain the declassified documents without court intervention. But as always, we are prepared to go to court if that is what it takes. Now we’ll have the full weight of the President’s inherent constitutional declassifying authority behind us.

But the President just took to Twitter, declaring publicly:

All Russia Hoax Scandal information was Declassified by me long ago. Unfortunately for our Country, people have acted very slowly, especially since it is perhaps the biggest political crime in the history of our Country. Act!!!

He then sent another tweet ordering the declassification of all documents pertaining to the “Russia Hoax” and “Clinton Email Scandal,” which is well within his inherent constitutional authority to do. The President made clear:

I have fully authorized the total Declassification of any & all documents pertaining to the single greatest political CRIME in American History, the Russia Hoax. Likewise, the Hillary Clinton Email Scandal. No redactions!

We immediately sent a legal letter to the Department of Justice demanding all previously withheld or redacted records pertaining to the so-called Russia collusion investigation, specifically in our FOIA lawsuit over Comey’s spies, be turned over to us, but this time, unredacted:

The ACLJ hereby requests that all records previously withheld or redacted based on the (b)(1)classified exemption be produced. As to records withheld or redacted based on (b)(1) as well as one or more additional exemptions, the ACLJ requests that withholdings be reevaluated without the (b)(1) basis, as the record(s) may now be amenable to public release or contain reasonably segregable information, even if, for example, a legitimate (b)(5) or (b)(6) redaction of part of the record may still be appropriate.

The ACLJ also requests an explanation as to why records in this case were withheld or redacted as classified given the President’s announcement that he declassified all Russia Hoax Scandal documents “long ago.”

The American people need to know what was so important that Obama’s top White House lawyer had to tell Comey and McCabe on the eve of President Trump’s inauguration. It certainly doesn’t seem like a simple thank you for your service letter.

The letter’s contents – and the other records which we now know have been ordered declassified by the President – will likely just expose even more Deep State subversion in the Obama-Biden FBI, led by Comey himself. Numerous records have been withheld from us in these cases based on the agencies claiming they were classified. Now we know they are not.

This is why we keep pushing and digging. Our work does not stop. Deep State conspirators must be held accountable. That’s why we didn’t just send a toothless letter; we made it clear that if the Deep State FBI doesn’t turn these documents over to us fully – unredacted – this time: “We are preparing to advise the Court of our request given the President’s very recent public announcement . . . .”

We’re also preparing similar letters in some of our other related FOIA cases, and we’ll keep you updated on our progress. We WILL get the truth. 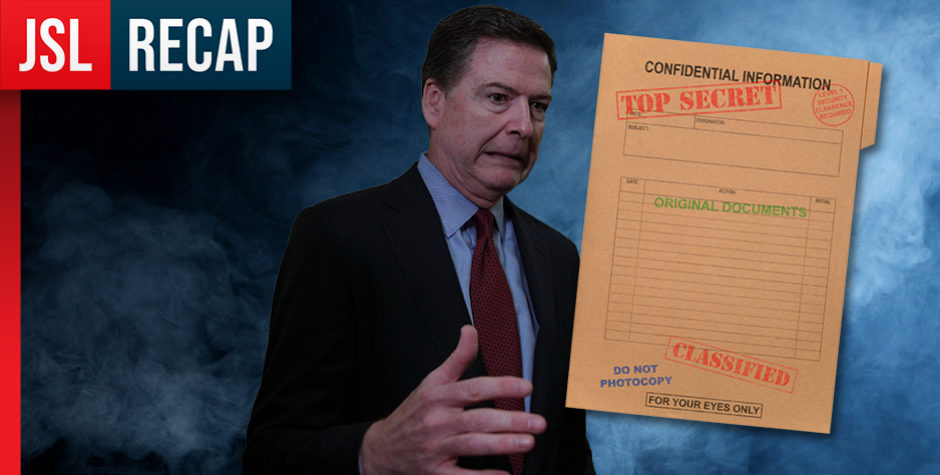