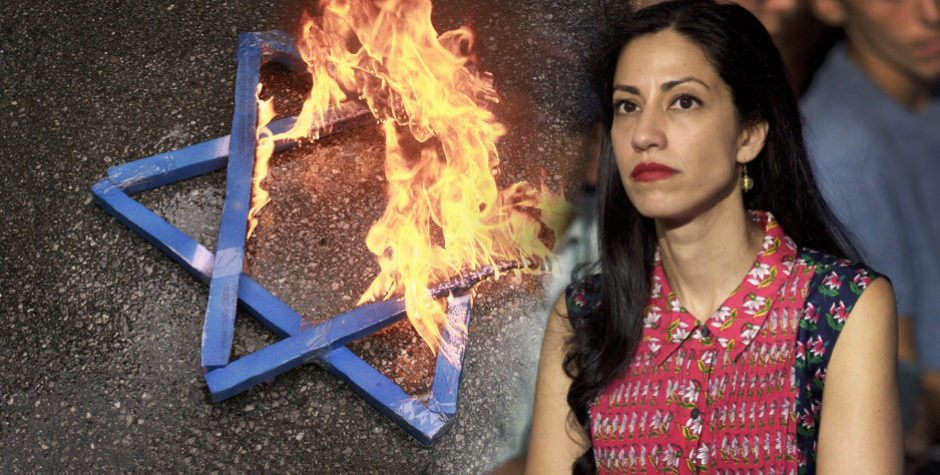 One of our Freedom of Information Act (FOIA) requests has just uncovered more anti-Israel rhetoric from the Obama Administration, specifically Clinton’s inner circle. This time it’s coming from one of then Secretary of State Hillary Clinton’s top aides – one with questionable ties to the Muslim Brotherhood.

Through our FOIA lawsuit, originally filed against the Obama State Department, the ACLJ has just obtained an email from Huma Abedin, the former Deputy Chief of Staff under Hillary Clinton at the State Department, in which she was told that the American Israel Public Affairs Committee (AIPAC) was very interested in having former President Bill Clinton come speak at a conference.

Abedin’s response to the request: “U really want to consider sending him in to that crowd?”

The condescension of referring to a respected, bipartisan organization like AIPAC as “that crowd” is simply offensive. “That crowd” was a group of Americans who strongly support Israel. As stated on their website, AIPAC’s mission is: “to strengthen, protect and promote the U.S.-Israel relationship in ways that enhance the security of the United States and Israel.”

In September 2009, Band emailed Abedin and Cheryl Mills, Clinton’s Chief of Staff and personal lawyer, asking, “Aipac begging for wjc [former President Bill Clinton] to come speak at conference[.] He doesn't think he should unless you all do[.]” Mills responded “Let's ask Hrc [Secretary Clinton] b/c we need to touch this base.” Abedin quickly shot the idea down, “U really want to consider sending him in to that crowd?”

Abedin’s dismissive reference denigrated one of the primary voices in America for Israel’s interests. The question we have is why? What objection could Abedin have to the former President speaking to a pro-Israel American group? This was someone working inside the State Department, with the ear of a future presidential candidate.

In fact Huma Abedin and Hillary Clinton were so close, according to an expose in Vanity Fair, she was reportedly referred to as Clinton’s “shadow.”

Huma Abedin has spent more of her life working with Hillary Clinton than not. Politco once described her as Hillary Clinton’s “shadow.” In 1996, Abedin started working for Clinton when she was a 19-year-old George Washington University Student, assigned to the First Lady’s office. Abedin has maintained her closeness to Clinton through the years, serving as both the back-up to Clinton’s personal aide as well as Clinton’s aide and personal advisor while Clinton was campaigning for the U.S. Senate in 2000. When Clinton ran for president, in 2008, Abedin was her “body woman” and traveling chief of staff. Then, Abedin became Clinton’s deputy chief of staff in the State Department.

Clinton even reportedly arranged it so that Abedin could double-dip, working for the State Department and a private firm, and Abedin requested her travel expenses to her second-job be picked up by the taxpayers.

Hillary Rodham Clinton personally signed off on the controversial deal in 2012 that let her top aide Huma Abedin simultaneously work for the State Department and a private New York firm with deep ties to the Clinton family, according to records made public Thursday.

The State Department emails released to select congressional committees and the watchdog group Judicial Watch also show that almost immediately after Ms. Abedin got permission to work in New York for the Teneo Group, she tried to get the federal government to pay the cost of her commuting back and forth to Washington to serve as a senior adviser to Mrs. Clinton, who was then the secretary of state.

And Abedin would go on to be the Vice Chair of Hillary Clinton’s 2016 presidential campaign.

What doesn’t seem to get mentioned in many mainstream articles about Abedin were her ties to the Muslim Brotherhood – a group that President Trump is considering designating as a terrorist organization – which might shed some light on the real source of her apparent disdain for “that crowd” of pro-Israel Americans. As reported in The Hill:

The New York Post ran a detailed investigative piece over the weekend about Ms. Abedin’s work at the Journal of Muslim Minority Affairs from 1995 through 2008, a Sharia law journal whose editor in chief was Abedin’s own mother.

This is not some accidental association. Ms. Abedin was, for many years, listed as an associate editor of the London-based publication and wrote for the journal while working as an intern in the Clinton White House in the mid-1990s.

Her mother, Saleha Abedin, sits on the Presidency Staff Council of the International Islamic Council for Da’wa and Relief, a group that is chaired by the leader of the Muslim Brotherhood, Sheikh Yusuf al-Qaradawi.

Interestingly, the article states she worked for the Journal of Muslim Minority Affairs through 2008. The email we received through our FOIA was written in September of 2009. Within the span of a year, Abedin went from working for her mother’s journal, with direct ties to the Muslim Brotherhood, to an extremely influential position at the State Department, where she condescendingly discouraged interacting with a pro-Israel organization.

Abedin’s father is reported to have clear ties to, at the very least, terrorist sympathizers.

Her father, Syed Zaynul Abedin, was a professor in Saudi Arabia who founded the Institute for Muslim Minority Affairs, an institution established by the Government of Saudi Arabia with the support of the Muslim World League.

The Muslim World League was “perhaps the most significant Muslim Brotherhood organization in the world,” according to former federal prosecutor Andrew C. McCarthy. Its then-General Secretary, Umar Nasif, founded the Rabita Trust, “which is formally designated as a foreign terrorist organization under American law due to its support of al Qaeda,” he wrote.

This is exactly why we at the ACLJ are always telling you elections really do matter. Those placed in office bring with them people who shape our government’s policy. Consider for a moment the position Huma Abedin might have been given had Hillary Clinton won the election in 2016. Imagine the power this person with deep ties to the Muslim Brotherhood, and apparent contempt for a prestigious pro-Israel group might have held in the White House. Imagine what that might have spelled for our relationship with our great ally Israel.

Contrast that disturbing thought with the reality of what President Trump’s Administration has done for Israel, strengthening our relationship, including withdrawing the U.S. from the faulty Iran nuclear deal which was very dangerous for Israel, and making history by recognizing Jerusalem as Israel’s one true capitol and relocating our embassy there – something ACLJ Chief Counsel Jay Sekulow has been fighting for, literally for decades.

We told you about a recent report indicating that violent anti-Semitism is on the rise not just globally, but right here in America. Anti-Semitic rhetoric has even seeped its way into our own Congress. Rep. Ilhan Omar (D-MN) even made a disparaging, anti-Semitic comment about AIPAC. Based on this new information brought to light through our FOIA investigation, we might have had those with similar views working in the White House. And for years, we know they held senior positions in the State Department. Is it any wonder the Obama Administration betrayed Israel in its final days?

Blatant anti-Semitism and bigotry can never be tolerated, least of all among our leaders.