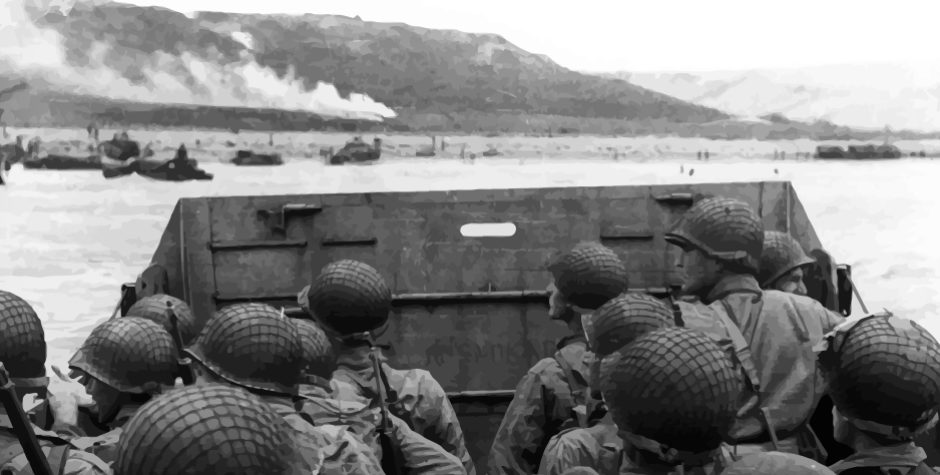 It was on June 6, 1944 that the Allied landings began on the coast of Normandy, France in order to liberate Europe from Nazi tyranny.  It is one of the most famous dates, and the largest military operation of its kind, in modern history. As each year goes by, more and more of these men who are part of that greatest generation pass away.  It is fitting that we remember all of them, those living and dead, on the anniversary of this collective act of courage and commitment.  As the attack on Pearl Harbor is a day that will “live in infamy,” this date is one enshrined in the halls of fame and bravery.

It was against all odds that Operation Overlord, as it was called, was executed.  The allied troops were vastly outnumbered by the Germans defending that coast.  In any siege, it is always those defending terrain that have the advantage, even if the troop strength is equal, making the events of this day even more courageous.  The men who left the relative safety of their landing crafts to storm those beaches knew that many of them would not survive.  Indeed, on that first day of the operation, there were some 10,000 casualties, with 4,114 killed in action.  General Dwight Eisenhower was told to expect a casualty rate of seventy-five percent; he ordered the attack anyway.  Over 150,000 soldiers from the United States, Canada, and the United Kingdom stormed the beaches.

While it was an Allied operation, the events of D-Day reflect the courage and values of the United States:  Liberty and freedom, a belief in democracy and the rule of law, a commitment to the downtrodden, captive and persecuted, and a willingness to die in the defense of these values.  It was the classic battle between good and evil.  This week we salute the men who did so much for so very many, men who, like our founding ancestors, were willing to risk their lives, their fortunes and their sacred honor in the defense of freedom.

I had the honor with my wife to be at Normandy for the fifty-eighth anniversary of D-Day.  It was a day I will never forget.  As I walked the beaches on that day, I was keenly aware that I was standing on holy ground.  And as truly honored as I was at the time to be on active duty in the U.S. Army, to have met and talked with then-President George W. Bush that day, and to have officiated at the funerals of some of the men who were veterans of D-Day in my career—the high honor for me was wading in the surf that day and thinking about how much blood was shed on the very ground on which my feet were placed.  We were moved to tears as we remembered what took place there.

As Americans, may we never forget. We must remind ourselves that freedom is not free and never has been.  We still enjoy freedom today because others were willing to sacrifice their lives in a noble cause—and for us.  It should move us to perpetual gratitude.  The men and women of the U.S. Armed Forces today, descendants of the veterans of D-Day, still pledge themselves to live and, if necessary, to die in defense of freedom.

With awareness that men and women have died for our country and that for which it stands, I am reminded of the words of the poet Josiah Gilbert Holland:

God, give us men! A time like this demands
Strong minds, great hearts, true faith and ready hands;

Men whom the lust of office does not kill;
Men whom the spoils of office cannot buy;
Men who possess opinions and a will;
Men who have honor; men who will not lie;
Men who can stand before a demagogue
And damn his treacherous flatteries without winking!

Tall men, sun-crowned, who live above the fog
In public duty, and in private thinking;

For while the rabble, with their thumb-worn creeds,
Their large professions and their little deeds,
Mingle in selfish strife, lo! Freedom weeps,
Wrong rules the land and waiting Justice sleeps.

Wrong does indeed rule many lands.  And America still stands as the beacon of light and hope, a nation with liberty and justice for all.  May God bless the United States of America and all who are privileged to call it home.  We honor the soldiers, sailors, airmen and marines of D-Day.