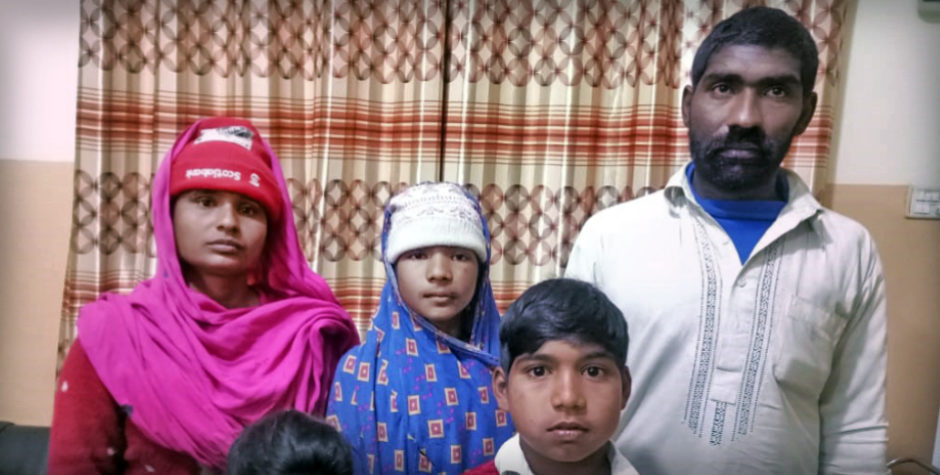 This is a good day for the Organization for Legal Aid (OLA), our international affiliate the European Centre for Law and Justice (ECLJ) in Pakistan. We have successfully recovered a Christian family of five from captivity, forced labor, and physical torture.

Imran Masih’s family is finally free after nearly five years of bonded labor and severe brutality.  On March 11, 2019, the Lahore High Court granted our habeas corpus petition, appointing a court official and a police squad to recover the Masih family.

Two Muslim brothers, Ali Bajwa and Anees Haider, had illegally confined Imran Masih, his wife, and three children at their farm in Faisalabad, about 150 km west of Lahore.

Ali and Anees hired Imran Masih and his wife to work at their farm. Imran was working as a farmer and looking after the livestock, while his wife was responsible for cleaning and kitchen tasks.

After years of not being paid as bonded laborers, the family of five escaped in October 2018. Three months later, while visiting family in another part of the country, Ali and Anees kidnapped Imran, Nazia, and their three children, and brought them back to their farm.

The captors tortured Imran Masih, rolled iron rods on his thighs, beat him, and threatened further harm to his family if he did not comply with their orders.

The family was again forced into labor and shackled in chains to prevent another escape.

On February 26, 2019, Imran escaped around midnight to get help for his wife and children who were still enslaved.

Imran was referred to us by a friend of the organization and, on March 11, 2019, the OLA attorneys filed a habeas corpus petition in the Lahore High Court. Our team of attorneys and staff accompanied the court official and the police squad and arrived at the farm at around 8:30 PM. When Imran’s wife saw him and the police, she instantly ran to gather the children and get some luggage.  The court official and our team securely put them in a vehicle and drove off. Ali and Anees’ security guards tried to follow the vehicles but could not intervene due to the police squad.

After the family was recovered, our team interviewed Imran’s wife and children and discovered that Imran’s wife had been raped by three of Ali and Anees’ friends.

We are in the process of preparing another petition to bring charges against Ali and Anees for kidnapping, forced labor, torture, and rape.

Currently, the family is staying with relatives at a safe place for a few days until a criminal case has been filed against the captors. But the OLA is working on helping the Masih family start a new life in a different city.

We are glad that justice has been served and that the Masih family’s enslavement has come to an end once and for all. However, they need prayers for healing and safety.