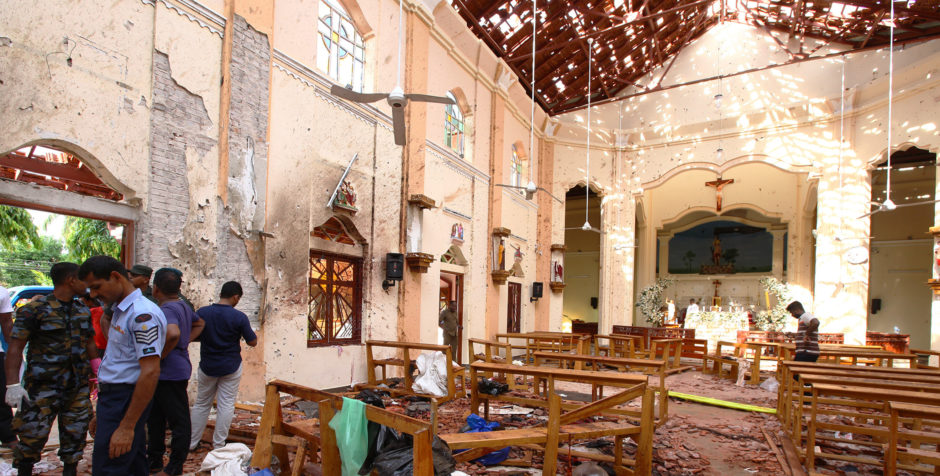 Once again, unsuspecting Christians gathered in churches with their families to celebrate Easter Sunday – one of the most sacred holidays in the Christian faith – have been ruthlessly killed by Islamic jihadists.

There is no other way to describe it but true evil.

A series of blasts tore through churches and luxury hotels in Sri Lanka on Easter morning, killing at least 290 people and wounding more than 400 in coordinated attacks on tourists and the country’s minority Christian community.

At least eight explosions, most blamed on suicide bombers, took place across the country. Restaurants and houses of worship that moments earlier were hosting holiday feasts and joyful services were plunged into chaos, filled with rubble, broken furniture, shards of glass and the wounded and dead.

The updated total of those wounded now stands at about 500 people.

An Australian survivor described one of the scenes as “absolute carnage” and said “There were people screaming and dead bodies all around.” Other witness reports of the massacre and the chaos left by the bombers have been too heartbreaking and disturbing to repeat.

An older man reported that he and his wife only survived because the church was too full when they arrived, so they chose to go to another location. But he says family members claim to have seen the suspected bomber coolly patting children on the head as he passed them on his way inside the church.

Now there are reports that the Sri Lankan authorities had been warned over a week before about potential attacks on churches, but no action was taken, possibly due to internal political skirmishes.

Ten days before the bombings, a top Sri Lankan police official warned the security services that a radical Islamist group was planning suicide attacks against churches, but no action was taken against the group. It was unclear what other precautions, if any, the security agencies had taken in response to the threat warnings.

Prime Minister Ranil Wickremesinghe said on Sunday that neither he nor his cabinet ministers had been informed of the warning, highlighting the power struggle between him and President Maithripala Sirisena, who is also the defense minister.

Sadly, deadly violence against Christians celebrating the Easter holiday is not a new occurrence. Just a year ago, we told you how a family in Pakistan was gunned down by jihadist assassins on motorcycles, leaving a terrified 12-year-old girl as the lone survivor.

That massacre came just two years after a suicide bomber entered a Pakistan park where groups of Christian families had gathered to celebrate Easter and murdered at least 72 Christians – including 17 innocent children.

And two years ago, in a horrific attack similar to this latest violence, we reported that ISIS bombers struck Egyptian churches during Palm Sunday services, killing 29 Christians and wounding 69 more.

We’ve continually reported an escalation of these deadly jihadist attacks on Christians for years. Yet the local governments seem unable or unwilling to stop the violent persecution. Now the politically correct left and mainstream media have been left with no choice but to admit we were right. This bloodthirsty persecution has to stop immediately.

The ACLJ just submitted evidence to the U.N. regarding these past Easter attacks, warning “Christians are routinely the target of Islamic extremists, and it is not uncommon for these attacks to occur at places of worship during major Christian religious holidays, such as Christmas and Easter where Christians . . . gather to worship.”

The international community has to stand up and say this must end. Christians must be protected and allowed to live in peace like every other religious group. The vile terrorists who orchestrated these attacks, and others like them, must be tracked down, even to the ends of the earth, and brought to justice.

Our prayers go out to the victims and their families as we are all one in the body of Christ. That is why we must also take action to keep this sort of senseless tragedy from being repeated, yet again.

UPDATE 4.25.19: The death toll has since been revised to 253 victims and over 500 wounded. As we reported, ISIS has officially taken responsibility for the deadly attacks. An official statement from Amaq, the Islamic State’s news agency, called the suicide bombers “fighters with the Islamic State” and warned “Cross Worshipers.” The jihadist militia called Easter a “blasphemous holiday.” This latest atrocity verifies ISIS intends to spread its campaign of genocide against Christians across the globe.

In the next few weeks, we’re filing new submissions at the U.N. in defense of persecuted Christians. But we can’t go to the U.N., mobilize our global offices, and engage world leaders to protect Christians living in immediate danger without you. Take action with us.