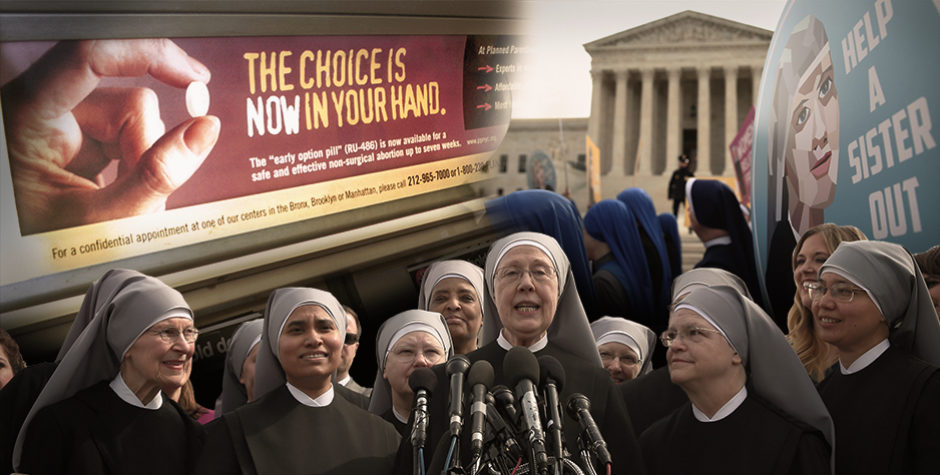 Yesterday, the Supreme Court heard oral arguments in the Little Sisters of the Poor case. This case is not only important in its own right (can a Catholic order of nuns be compelled to violate their religious convictions?), it’s a critical one for religious freedom in general (can the government lift substantial burdens on the free exercise of religion that the government itself has imposed?).

As explained here, this case involves regulations issued by the Trump Administration providing religious and moral exemptions to complying with the abortion-pill mandate, i.e., the Obama Administration requirement that employers participate in the provision of abortion-pills through their employee health plans.

On behalf of over 463,000 ACLJ members, we filed an amicus brief in support of the Little Sisters of the Poor and the Trump Administration, asking the Court to uphold the exemptions.

As with all the Supreme Court cases being argued this week and next, yesterday’s arguments were conducted telephonically, with Justices asking questions of the advocates according to seniority. It was a lively and lengthy one.

To say that Paul Clement, counsel for the Little Sisters of the Poor, and Noel Francisco, Solicitor General for the United States, did a remarkable job pressing their arguments would be an understatement. Both attorneys were articulate and passionate in answering the questions posed by the Justices.

In response to questions by Justices Ginsburg and Sotomayor, that the religious exemptions would deprive women of their right under the Affordable Care Act (“ACA”) to obtain “seamless coverage” for contraceptive services, Mr. Francisco pointed out a critical fact: “there’s nothing in the ACA, as this Court recognized in Hobby Lobby, that requires contraceptive coverage. Rather, it delegated to the agencies the discretion to decide whether or not to cover it in the first place.”

Indeed, as we explained in our amicus brief, it was the Health Resources and Service Administration—not Congress—that adopted the “Women’s Preventive Services Guidelines.” And it was those guidelines—not the ACA—that, in the words of Hobby Lobby, require “nonexempt employers . . . to provide coverage, without cost sharing for all Food and Drug Administration approved contraceptive methods, sterilization procedures, and patient education and counseling.”

Mr. Clement followed up on the Solicitor General’s response to Justice Ginsburg, noting that not only did Congress not “specify that contraceptions would be included in the preventative health mandate,” Congress didn’t impose the preventative mandate on grandfathered plans, as it did with preexisting conditions and coverage for people up to age 26. Why is that important? Because, as Mr. Clement argued, the “clear teaching” of the Religious Freedom Restoration Act (“RFRA”), “is that if when you’re going to give those kind of exceptions to people for secular reasons, then you need to give those kind of exceptions to religious believers.”

With respect to the argument that the so-called “accommodation” concocted by the Obama Administration doesn’t burden the religious exercise of entities of those who object to it, Mr. Clement was clear:

when the government imposes a burden on religion by telling the Little Sisters that they have to comply with the mandate or the accommodation or else, when the “or else” is massive penalties, that plainly provides a substantial burden on religious exercise.

Indeed, as Justice Alito pointed out later in the arguments:

Hobby Lobby held that if a person sincerely believes that it is immoral to perform an act that has the effect of enabling another person to commit an immoral act, a federal court does not have the right to say that this person is wrong on the question of moral complicity. That’s precisely the situation here.

In light of the opposing interests between (1) providing contraceptive coverage and (2) protecting religious objectors, Chief Justice Roberts asked, “[i]s it really the case that there is no way to resolve those differences?”

Mr. Clement answered that after the Supreme Court punted the issue in the Zubik decision (the last time the Little Sisters came before the Court), “there was a lot of back and forth between the religious objectors and the government,” but the sticking point was the insistence of the Obama Administration to provide coverage through the health plans of religious objectors. In other words, so long as the government was going to force religious objectors to be complicit in the coverage of drugs to which they morally object, there’s no “third way” to resolve the differences between the competing interests.

According to Mr. Clement, “the federal government finally got the message,” and, for that reason, the Trump Administration “exempted the Little Sisters. That exemption remedied the RFRA violation and followed the best of our traditions.”

Finally, Mr. Clement made the important point that the Little Sisters are not trying to get in the way of their employees accessing contraceptive services. The Little Sisters simply don’t want to have any part of such access:

[T]he Little Sisters don’t have any objection if their employees receive those services from some other means. Their objection essentially is to having their plans hijacked and being forced to provide those services through their own plan and plan infrastructure.

As for the employees of the Little Sisters themselves, Mr. Clement made the observation that throughout years of litigation, “we have not heard of even a single employee,” who objects to the Sisters’ religious objection:

With the conclusion of yesterday’s arguments, only one thing remains: a decision.

When that decision comes down, most likely by the end of June, we will let you know how the Court rules, and how that ruling will impact our most precious freedom: the right to exercise one’s religious conscience.