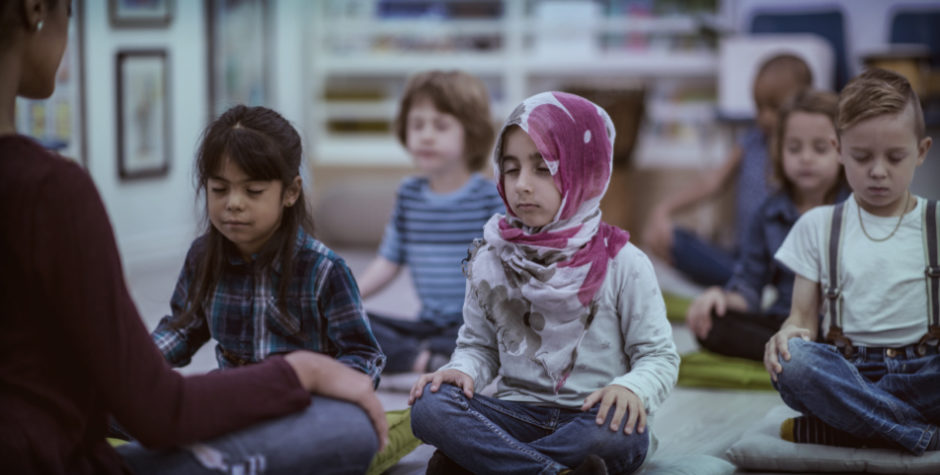 For months, the ACLJ has worked to defend the rights of students in public schools across the country who are being subjected to classroom-led mindfulness and meditation sessions – a core religious practice of Buddhism and other eastern religions.

The ACLJ has been successful in representing parents who want to ensure that their children are not subjected to this activity during school instruction by demanding that the school allow their children to opt out of mindfulness and meditation sessions. The ACLJ is also working to educate schools on the religious nature of these mindfulness programs which go beyond the boundaries of permissible cultural education and constitute the endorsement of eastern religious practices. Public schools’ requirement that students participate in a religious or spiritual activity, such as mindfulness or meditation, is a violation of the First Amendment.

As the mindfulness revolution continues to sweep our nation, students are not the only ones whose rights are being infringed. Teachers and other public employees, alike, are being forced to attend mindfulness and meditation training and/or are under significant pressure to participate in such practices despite their stated religious objections.

We have received inquiries from public employees who want to know whether it is within their rights to opt out of or refuse to participate in mindfulness and meditation trainings and practices. Forcing a teacher to participate and be trained in the mindfulness curriculums, when it is against his or her religious beliefs, violates federal law.

Despite the heavily documented connection mindfulness has to Buddhism, proponents of mindfulness, who have everything to gain from pushing their programs into the public sector, continue to maintain that mindfulness is purely secular. Such assertions are made despite many proponents’ admission that clearly Buddhist principles are embedded in the mindfulness programs (such as the observance of all thoughts and feelings without judgment; the belief that life is cyclical and humans are inherently good; and the idea that we are magnificent and all happiness can be achieved through self-discovery and self-reliance).

Indeed, mindfulness proponents have admitted that mindfulness is a “Buddhist Trojan Horse” and “Stealth Buddhism.” Mindfulness has even been dubbed as the “new American religion.”

It is not uncommon for a public employer to discount an employee’s religious objection to mindfulness training and/or implementation of the program in daily class schedules. Some schools’ administrators have been quick to dismiss the concerned employee’s objections; others have even criticized or questioned the sincerity of the employee’s religious beliefs. How should teachers and other school employees respond in these situations?

The law prohibiting religious discrimination in the work place has been codified under Title VII of the Civil Rights Act of 1964. 42 U.S.C. §§ 2000e et seq. Title VII also protects against discrimination based on race, color, sex, or national origin.

Generally, teachers who are required to attend a mindfulness training program may go to the human resources department and find out the curriculum for the program. After reviewing the program, they may inform the employer of any parts that violate their sincerely held religious beliefs. Legally, if the training or practice violates an employee’s sincerely held religious beliefs, employers must allow the employee to opt out. And public schools are no exception.

In order for an employee to be protected under Title VII, he/she must show that:

(1) He/she holds a sincere religious belief that conflicts with an employment requirement;

(2) He/she has informed the employer about the conflict; and

(3) He/she was discharged, disciplined, or subjected to discriminatory treatment for failing to comply with the conflicting employment requirement.

Employers should give employees advance notice of the nature and content of the training. And employees should have the right to opt out of objectionable training if it violates their sincerely held religious beliefs. Employees who have already been forced to participate in a program can still opt out of training in the future.

As many public schools continue to ignore the information they have been presented regarding the religious teachings embedded in mindfulness, conflicting research regarding its effectiveness and the dangerous side effects documented following the practice of mindfulness, the ACLJ continues to engage public school districts on this issue.

Most recently, with the ACLJ’s assistance, a teacher was able to address the matter with her employer and obtain permission to opt out of future mindfulness training.  In addition, another school district recently committed to re-evaluate the use of a mindfulness program in its public schools.

As we build on these victories to protect both teachers and students’ religious liberty, you can join us by signing the petition below.

The ACLJ represents three churches in a lawsuit challenging California’s ban on all singing and chanting at indoor worship services throughout the state. We recently filed a supplemental brief asking the court to prevent California from enforcing the ban while the case moves forward. In an earlier...

Writing the Book On Religious Freedom in the Workplace

Does a person of faith have to leave his religious commitments at home when he enters the workplace? Does he have to place job duties ahead of his religious ones? What if an employer assigns a task that would require one to violate one’s religious beliefs? Unfortunately, far too many people (both...

This is a case involving fundamentals – fundamental tenets of what it means to be a U.S. citizen and fundamental beliefs of Christians and many other religious faiths. Fundamental to American civics is the right of citizens to vote, and often with that right comes the responsibility of serving on a...

The Supreme Court last week made a major move in upholding America’s constitutional norms, including the importance of the First Amendment’s protection of the free exercise of religion. Last week, the Court blocked enforcement of Governor Cuomo’s hyper-restrictive and highly discriminatory rules...