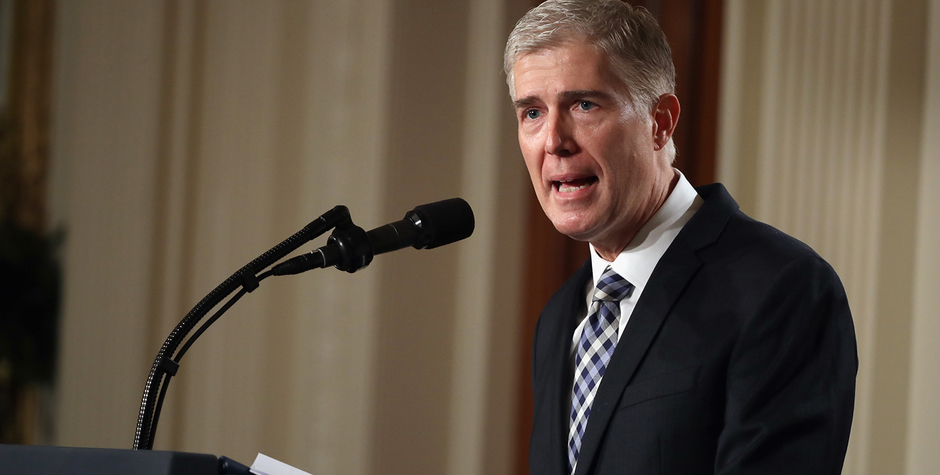 President Donald Trump’s selection of Judge Neil Gorsuch to serve on the United States Supreme Court fulfills his campaign pledge to nominate a conservative jurist to the Court. As this summary shows, consistent with this pledge, on both a substantive and linguistic level, Judge Gorsuch stands ready to continue a vitally important legacy of conservative jurisprudence on our nation’s highest court.

After a thorough and impartial review of Judge Gorsuch’s participation in a number of contentious cases, one can’t help but conclude that his judicial philosophy is guided by conservative jurisprudential principles that defend the U.S. Constitution and the rule of law.

For instance, Judge Gorsuch, has consistently sided with individuals, for-profit corporations, and nonprofit religious organizations when they lodged religious objections to the abortifacient component of the HHS Mandate of the Affordable Care Act (ACA) or to accommodation schemes offered by unelected and unaccountable bureaucrats at the Obama Administration’s Department of Health and Human Services. From his concurrence en banc in Hobby Lobby Stores v. Sebelius—siding with the faith-focused family business and its owners—to his dissent in the Little Sisters of the Poor v. Burwell in the 10th Circuit Court’s denial of a rehearing en banc, Judge Gorsuch has steadfastly placed the religious liberty of individuals and their economic and spiritual interests ahead of the preferences of leftist ideologues employed by the administrative state.

In both cases, Judge Gorsuch’s conservative inclinations were largely vindicated by the United States Supreme Court. Significantly, Judge Gorsuch’s opinion in Hobby Lobby reified the plaintiffs’ complicity argument—noting that the act of complicity is often a matter of faith that we must respect—which provided a basis for the Green family as owners and as individuals to vindicate their free exercise interests within the meaning of the Religious Freedom Restoration Act (RFRA).

In Little Sisters of the Poor, Judge Gorsuch joined in Judge Hartz’s dissent critiquing the 10th Circuit Court of Appeals Court’s cramped understanding of free exercise and religious liberty. The dissent understood that “[w]hen a law demands that a person do something the person considers sinful, and the penalty for refusal is a large financial penalty, then the law imposes a substantial burden on that person’s free exercise of religion.” It is doubtful that any rational person could disagree with this conclusion. Judge Hartz and Judge Gorsuch recognized something that the Supreme Court also understood: that courts are not the place for the examination of the reasoning behind a religious practice or belief. Even though the Supreme Court declined to reach the merits of this case on appeal in Zuibik v. Burwell, it is surely possible to infer that the Court agreed that courts are not the place to tell nuns whose average age is 65 that they must either purchase contraceptive insurance or accept a bureaucratic accommodation that requires that they violate their beliefs or face the possibility of being forced to stop caring for the elderly poor.

Not only has Judge Gorsuch defended religious liberty in these cases, but has also defended the religious liberty of Muslim and Native American prisoners.  Gorsuch isn’t afraid to confront government agencies and officials who trample on the constitutional rights of everyday Americans of every race, creed, and religion.

In Summum v. Pleasant Grove City, the question litigated was whether the city, which maintained 11 permanent, privately donated displays including a Ten Commandments monument could be compelled to erect a monument offered by Summum, a religious organization. Summum sought to compel the city to erect a monument containing the “Seven Aphorisms of Summum.” Judge Gorsuch joined with Judge McConnell’s well-crafted dissent. Judge McConnell’s dissent found that (1) the religious nature of the monuments accepted by the city were not relevant to Summum’s challenge, (2) public parks are not public forums, and (3) the contrary conclusion accepted by the 10th Circuit Court was unsupported by Supreme Court precedent. This dissent formed the basis of the Supreme Court’s decision reversing the 10th Circuit Court’s decision favoring the plaintiff. In a case argued by ACLJ Chief Counsel Jay Sekulow before the Supreme Court, the Court vindicated Judge McConnell’s dissent on appeal. Since Judge Gorsuch joined Judge McConnell’s well-crafted dissent, the Supreme Court’s unanimous opinion provided additional validation for Judge Gorsuch’s conservative bona fides.

In American Atheists v. Davenport, an angry atheist organization and individual atheists brought a § 1983 action against several Utah state officials. They alleged the defendants violated the Establishment Clause and the Utah Constitution by permitting a private highway patrol association to erect 12-foot tall memorial crosses on public roadsides designed to commemorate fallen police officers. The private association intervened. The District Court granted defendants motion for summary judgment and the plaintiffs appealed.  On appeal, the 10th Circuit reversed. This was followed by a petition for rehearing with suggestion for rehearing en banc. The 10th Circuit issued a new panel order but denied the petition for rehearing with suggestion for rehearing en banc.

Judge Gorsuch responded with a blistering dissent. In his dissent, he observed that the 10th Circuit has repeatedly misapplied the “reasonable observer” test. Misapplication gives rise to the inference that the court has flown the bounds of precedent. Judge Gorsuch remarked that Justice O’Connor has instructed courts that the “reasonable observer should not be seen as ‘any ordinary individual, who might occasionally do unreasonable things, but . . .. rather [as] a personification of a community ideal of reasonable behavior.” Judge Gorsuch found evidence that the 10th Circuit’s conception of the “reasonable observer” was flawed because its observer had fallen prey to bias that blinds him to the context. Judge Gorsuch also noted that the Supreme Court has “held that “[a] cross by the side of a public highway marking, for instance, the place where a trooper perished need not be taken as a statement of governmental support for sectarian beliefs.” This signifies that the 10th Circuit’s analysis is deficient in two ways. First the court is prepared to remain blind to the context of the religious symbols at issue and second, it has failed to see Supreme Court precedents that are obvious. Judge Gorsuch’s analysis exposed the 10th Circuit’s feeble eyesight. His analysis, in combination with his agreement with Judge Kelly’s dissent in this case, confirms Judge Gorsuch’s conservative credentials and his commitment to the rule of law.

Looking at his extensive career to date and his carefully crafted opinions and writings, there is no doubt that the Senate must confirm Judge Neil Gorsuch to the Supreme Court. At the ACLJ, we’re working around the clock to ensure his confirmation. Sign our petition below to join the fight today.